There is evidence of ancient life in the rocks beneath Whitcliffe Common, preserved as fossils. Indeed, some are scientifically very important, but most are tiny shells, difficult to see, and not obviously very special (some examples are shown below). Even so, such remains reflect the nature of life some 420 million years ago, a period known as the Silurian. These have enabled scientists to establish that this was a period when there was an ancient sea bed around Whitcliffe. The sea was getting shallower and eventually drained away, to be followed by a period when creatures were adapting to live during a period of transition from the open sea to shallow water, with limy muds on the old sea floor giving way to sands laid down in an estuary, later to be cut by rivers flowing over land. All this was at a time when life was beginning to emerge onto land for the very first time.

Unfortunately the evidence is difficult to see with the naked eye and generally only fragments can be found, complete fossils being very rare. So, in order to raise awareness and give an idea of what the more spectacular creatures looked like when they were alive at the time the Whitcliffe rocks were formed, a series of six fossil casts have been made of Silurian animals, placed at intervals along the Bread Walk. These are now described in the order you find them walking east from Dinham Bridge towards Ludford.

Fossil Cast No.1, on the far (east) side of the information plinth beside Dinham Bridge 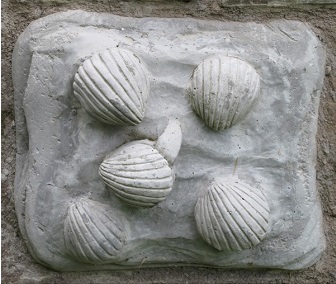 Shellfish. The cast shows five shellfish. However, these are not models of real animals but a representation to begin the trail. The creatures represented here appear to have a pair of shells and a pedicle similar to that of a bivalve mollusc, but animals with this appearance did not evolve until the time of the dinosaurs, some 200 million years later. The brachiopod shellfish were much more common at the time the Whitcliffe rocks were deposited in the Silurian sea, 420 million years ago, but their symmetry is at right angles to that of a bivalve and the muscle looking like a tongue in the middle specimen (“pedicle”) would have come out of the other end! Shellfish fossils found in the rocks of Whitcliffe are ten times smaller than those in the cast.

For information about real Silurian shellfish fossils, go to the main Geology page.

Fossil Cast No.2, by the first bench on the right along the lower path leading away from Dinham Bridge 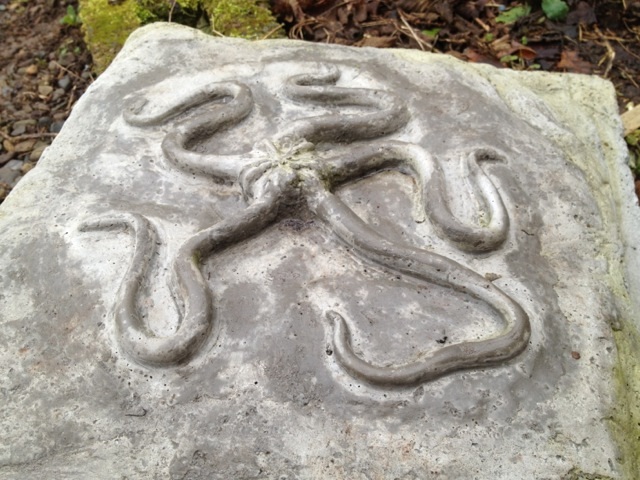 Starfish. The most famous locality yielding these very rare fossils is to the west, in the hills above Leintwardine. The real fossils are just 5 cm across. Rocks of similar age underlie the rocks by this bench and can be seen along this riverside walk (the “Bread Walk”) where Fossil Cast No.3 is situated.

Fossil Cast No.3, by the next bench along the lower path leading away from Dinham Bridge 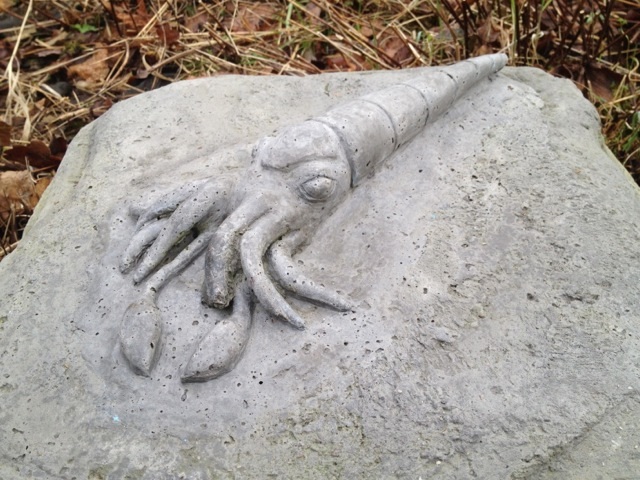 Orthoceras, a cephalopod with similarities to the modern squid and cuttlefish. These creatures liked coral reefs and so are hardly ever found in the muddy shallow waters around Ludlow. Only the hard cone is preserved, never the soft head and tentacles, so this is an artist’s reconstruction!  The real fossils are from 5 to 15 cm long.

Fossil Cast No.4, by the next  bench on the Bread Walk, backed by a small cliff, before the little waterfall 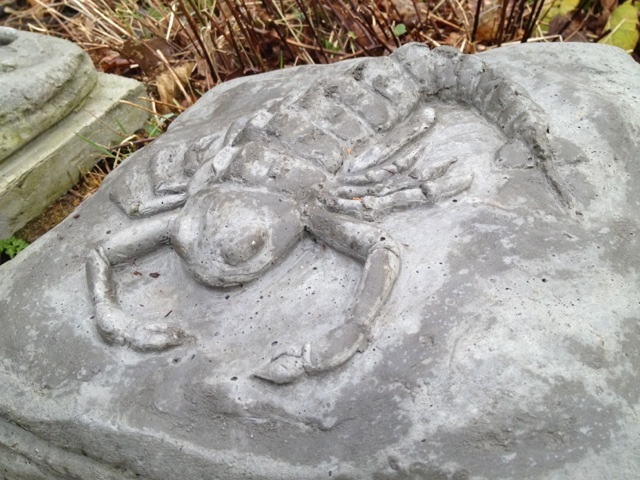 Eurypterid, a fearsome predator. This was an arthropod, but is now extinct. Fossils are extremely rare and generally only a fragment of a claw is preserved. The real fossils are about 15 cm long but the largest species reached a staggering 250 cm!  They fed on trilobites and shellfish, illustrated below.

Fossil Cast No.5, by the next bench on the Bread Walk backed by a cliff beside the path 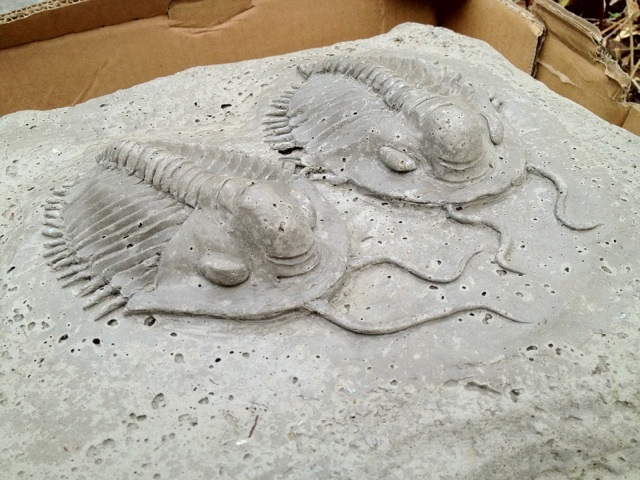 A pair of trilobites. Now extinct, these creatures were very common in the Silurian. Some, like the ones in these casts, had evolved to burrow for food in the mud of the sea floor (hence the shovel-shaped head); others had adapted to be free swimming or scavenge on the sea bed. Fossils are relatively common but generally only fragments are found. This artist’s reconstruction looks similar to the species Dalmanites. The real fossils are just a couple of centimetres across, much smaller than the gigantic casts!

Fossil Cast No.6, by the bench on the Bread Walk above the weir, at the start of the metal fence 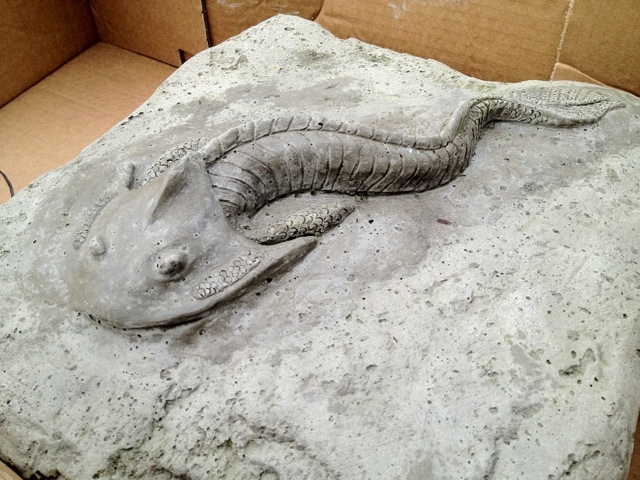 An armoured jawless fish (a Cephalaspis, which is a kind of osteostracan). This creature evolved as it adapted to the transition from open sea to freshwater conditions in the Ludlow area towards the end of the Silurian. It had not evolved at the time the rocks beneath Whitcliffe were laid down, but fossils of the animal have been found in the younger rocks just to the east, downstream of Ludford Bridge. These are extremely rare and generally only fragments of the head and individual scales have been preserved. However, Ludlow was fortunate to have three relatively complete specimens of the head discovered, in a quarry now backfilled just north of the town, and one of these can be seen in the Museum. The real fossils are about 20 to 40 cm long.

Having learned a little about these casts, you may wish to know that real fossils can be seen by visiting Ludlow Museum and the Resource Centre.

You are more likely to discover fragments of shells: brachiopods and ostracods. 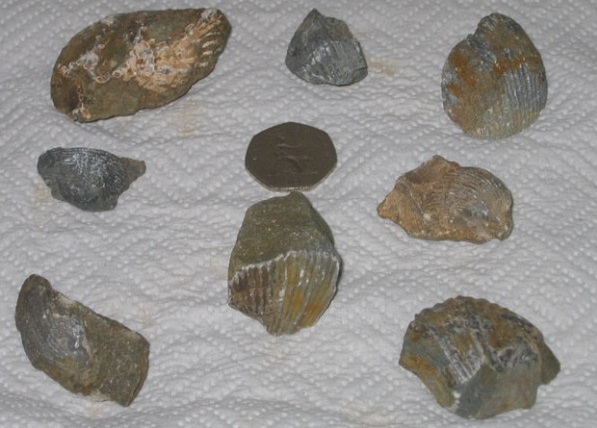 Some brachiopod fossils from near Whitcliffe. Photo at http://blog.everythingdinosaur.co.uk/blog/_archives/category/photospictures-of-fossils accessed 17 June 2013. Note the 50p coin for scale. 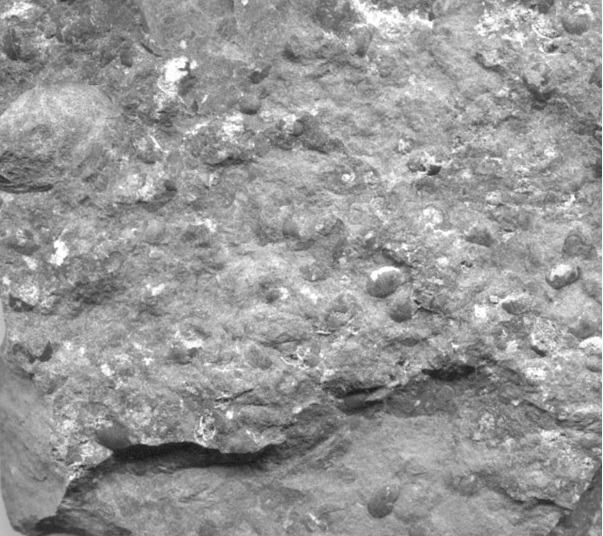 Inspired by the drawings of fossils and the life forms they came from by the late John Norton MBE, curator of Ludlow Museum.