Planting one of 20 native trees registered with the Queens Green Canopy being planted end of March 2022.

The storms of the Winter have left the carers of Ludlow’s favourite beauty spot – Whitcliffe Common – with plenty to do.

The band of volunteers who work free of charge for the Trustees of the Friends of Whitcliffe Common have been out regularly working to clear the damage caused through the winter.

Much of the usual maintenance work has had to be shelved while they have worked hard to clear paths of fallen trees, stacking logs and brash as neatly as they can.

Volunteer co-ordinator Rick Summers said, “There is an amazing amount of wood when a big tree falls down. Some were so big that they were beyond the capabilities of the volunteers. So we have had to use qualified help from staff of Shropshire Wildlife Trust (who hold the lease on the common and work hand in hand with FOWC)  and also outside contractors who have the necessary equipment such as winches.”

Mr Summers said there were 15 large trees which fell and blocked a number of paths.  Numerous others fell in not so public areas and were checked that they were safe and then left to form habitat while they rot down.

Limited permitted clearance will be carried out but the focus now, with nesting season restricting what can be done, will see the volunteers switch to normal maintenance including strimming around seats and keeping paths clear of brambles and nettles.

Whitcliffe suffered badly from this storm. Around 20 trees of various sizes were brought down, including large Oak, Beech and Larch. Blocked paths were cleared in time for Christmas by SWT and volunteers. Much remains to be dealt with by proffesional tree surgeons.

Wrekin Forest volunteers recently visited Whitcliffe on the lookout for unusual insects and they were well rewarded with David Williams getting this picture of a scarlet tiger moth while Jim Almond photographed a white plume moth and a white letter hairstreak.

The work party has 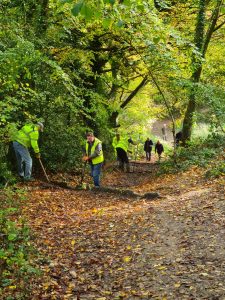 been out again reinstating the stone which guides rainwater off the paths and helps stop them wearing out.

After a series of incidents involving four wheel drive vehicles entering the old wood and causing problems we blocked off the southern part of the woods with tree trunks.
However the move proved unpopular with walkers who accessed the wood that way. We have now cut a way through the tree trunks so that walkers can once again access the wood from that direction. 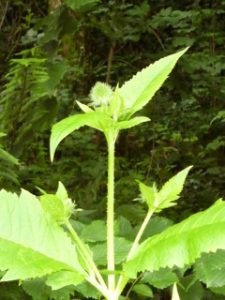 Rare teasel spotted on the Breadwalk 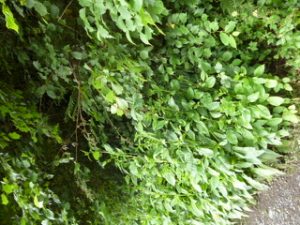 Small Teasel (Dipsacus pilosus) is not a common species in Shropshire but it has appeared on The BreadWalk. It differs from the more frequently seen Teasel (D. fullonum) by its having smaller and spherical flowering heads compared to the conical heads of Teasel. The latter is often found around Ludlow on waste ground and churchyards etc. whereas, Small Teasel has been spotted in Ludlow Castle last year. Now we have it growing nicely along the Breadwalk. It is biennial and likes damp shady conditions, si its present site on Whitcliffe is ideal and the plants can be admired by passing walkers. 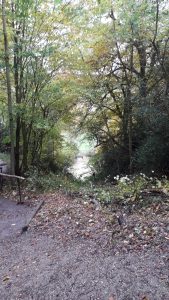 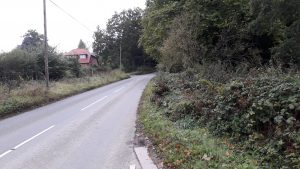 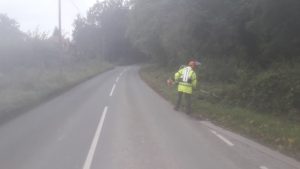 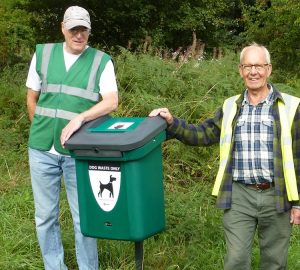